As New York is hit with another blizzard, it seems like a good time to share the soup recipes I’ve been saving since Israel was hit with a five day snow/hail/rain storm.  These soups were designed for the days when I knew I wanted a meal chock full of veggies, but it was just to cold to fathom eating a salad.  While most of the winter here has been absolutely lovely (~60F on average, high of 66F/19C today), the week of the storm was quite a nightmare.  Given my Northeastern upbringing, I’ve definitely experienced much colder weather, but the big difference is that it’s expected that winter will be cold in the Northeast, not so much in Israel (I mean some still think it’s cold…)  Here, apartments are built without insulation or even central heat.  I spent the first few days of the storm huddled under my thick duvet (thus justifying the investment) or cooking, since the kitchen was a little warmer than the rest of the apartment with both the oven and stove going.  Towards the end of the week, my roommate figured out how to get heat through our AC units, which at least made our rooms more bearable.  Although having hot, dry air blown at  you out of a machine is not exactly ideal, it was a much better option in my eyes than braving the storm to buy a small radiator (which would actually use about the same amount of energy).  Additionally, the warmest shoes I had were either ripped up converses, or the rubber ballet flats that had served as my work shoes, and I had to go out and buy a jacket just to attempt to keep warm outside.

Thankfully, that weather has passed now, a friend gave me a pair of boots to borrow for the season, and my new jacket is a perfect medium weight jacket to keep me warm when it cools off at night.  I’m also left with a bunch of warming, hearty, but still healthy soups!  Since the first bit of chill was felt in the air here, my roommates and I have consistently kept the fridge stocked with at least one soup per week, ranging from what I like to call “Clean Out the Fridge Soup” to chili, French Onion soup, and even  a curry lentil soup (or two).

Two weeks after the storm there was still some lingering snow on the Judean hills. December 2013

The first soup I made this season was a broccoli potato garlic soup, inspired by the Cinnamon Snail.  We don’t have any kind of blender or anything here, so we ate it chunky, but if you do own such technology, I say blend away!  It may even be good with a touch of soy or coconut cream added!  (I for whatever stupid reason, did not take any pictures of this soup).

In a large saucepan over medium heat, sauté the garlic in the olive oil for about a minute.  Add the onions and sauté about 5 minutes more until translucent.  Add the potatoes and broccoli, saute for another 2 to 3 minutes, add the herbs, salt and pepper to taste and cover with water.  Bring to a boil and then lower the heat.  Simmer about 30 to 45 minutes, until all the veggies are nice and soft.  Adjust seasonings, and puree if desired.

cooking/bakingfoodgluten freehealthylowfatrecipesoup recipesveganwinterwinter storms
January 28, 2014 By Ashley
0
Earl Grey Chocolate Buttercream: Made for the Stage! Any Veggies Will Do (Soup) 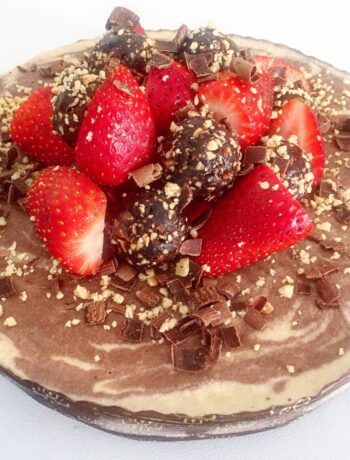