While I really wanted this post to be a Thanksgivukkuh recap of the party last Thursday, I felt like given my time constraints this week—between recovering from Thanksgiving, plus ulpan, and my internship (where we’re getting ready to put up a musical in less than a month)—I wouldn’t be able to do it justice and still get this recipe up before the end of Hanukkah. And, since the end of Hanukkah is imminent, there’s no better time to post a recipe than now (or last week).

Not that I ever disliked doughnuts, because let’s be honest, there were very few desserts I disliked growing up (except cheesecake. I was always picky about the whole cheese thing), but I feel like I really got into doughnuts when I had amazing, unique doughnuts readily available to me. Aka, when I started working in the city and could get doughnut plant doughnuts on the reg, or when the Cinnamon Snail started parking in my neighborhood on a weekly basis. Surprisingly, vegan doughnuts entered the New York City food scene late in the game. I’d already had the best ice cream ever (from the shop formerly known as Lula’s) and some pretty good vegan cheese, as well as a myriad of other vegan desserts. And yet, the doughnut was fairly elusive. Despite attending the Dun-Well Doughnuts launch party, they weren’t easy to come by, even after they opened their shop (because their shop is pretty much in Bushwick). But once the Cinnamon Snail was in my ‘hood, I found that there was many a Thursday morning, I only got dressed and left the house as early as I did because an artisanal vegan doughnut sounded like a good idea for breakfast. And boy oh boy how I missed doughnuts. Even at work it was a special treat when Kristin made doughnuts.

Here in Israel, especially at this time of year, soufganiyot proliferate, but there is nary a vegan one to be found. While doughnut making isn’t exactly my favorite thing to do, as a once a year Hanukkah treat, it’s really not so bad. I was in finals during Hanukkah last year, so I didn’t get a chance to experiment, and oddly enough, though I know I made some the year before, I can’t at all remember what kind they were, or even which recipe I used. Regardless, (as I say every year) this year’s batch was the best to date. Of course, as I’ve written about for the last month or so, I had to up the ante and not only make doughnuts, but make something special to celebrate the convergence of two major holidays. And thus, the sweet potato soufganiyot (aka doughnut) was born. I actually wanted to have two Thanksgiving inspired fillings: cranberry sauce and macadamia nut creme (paying homage to my family’s tradition of macadamia nut pie). Unfortunately, I couldn’t find fresh or frozen cranberries here, so I settled for making one big batch of cranberry apple sauce for both soufganiyot and latkes, made with a mix of fresh apples, dried cranberries, and a hint of cinnamon. The macadamia nut pudding, I did manage to execute to an extent. It turned out to be an utterly delicious creme with a little brown sugar and some crunchy macadamia nuts; however, for fear of ending up with macadamia nut concrete, I under thickened, and my pudding was a little too runny for filling (especially with my make-shift equipment). In the end, I did what any good housewife would do, and turned it into soufganiyot trifle. It was a hit, and in good form, I finished it for breakfast this morning.

Young doughnuts, getting ready for their hot oil bath

Now onto the recipe! I combined two recipes I found, one for vegan doughnuts, and one for non-vegan sweet potato doughnuts, originally found here and here. The result was a divinely soft and fluffy doughnut, with the faintest hint of nutmeg, and a little bit of natural sweetness from the sweet potato. It was the perfect compliment to both the creamy pudding and the sweet and tangy apple sauce.

Combine half the warm non dairy milk with the yeast in a small bowl or measuring cup and let sit. In a small saucepan over medium heat, combine the starch with the 1/2 c milk and cook until thick like pudding, stirring constantly. Remove from heat. Add the margarine and stir to melt. Then incorporate the sugar, and the remaining almond milk. Combine with the yeast mixture, stirring gently.

Add half the flour, salt, and nutmeg and mix in with a wooden spoon (or dough hook if you have one of those fancy contraptions). Add the rest of the flour, one cup at a time, until the dough is no longer wet and sticky. You may have to add a little extra because of the sweet potato. Knead the dough until it’s just smooth. You don’t want to over knead, or else you will have bready doughnuts.

Place in a greased bowl and cover. Let rise about an hour, until doubled in size. I actually made the dough the night before and let it rise fully, then punched it down and let it rise halfway again and put it in the fridge overnight. In the morning, let the dough come to room temperature. Don’t punch it down, but flour your work space and lightly pat the dough with flour. Roll out until it is 1/2 in to 3/4 in thick. Using a cookie cutter or glass that measures about 3 in in diameter, cut out the doughnuts, then set aside to rise. When you finish cutting out the doughnuts, begin heating the oil in a dutch oven over medium heat until the oil reaches 365 degrees. You can test this by pinching off a little piece of dough and dropping it in the oil (if you don’t have a candy thermometer). If the oil bubbles around the dough, and the dough floats to the top, the oil is ready.

Fry the doughnuts 3-4 at a time (you don’t want to crowd the pan) several minutes on each side, til both are a beautiful golden brown. Drain on a tray lined with paper towels or brown paper bag and let cool.

Hot tub shot with latkes frying in the background

Place all ingredients in a saucepan over medium heat. Stir until everything is evenly mixed. Bring to a bowl, then lower to a simmer. Cook until the apples are completely soft, and pretty much turn to mush just by stirring. The cranberries will have plumped up, and then hopefully broken down a little more. Using a spoon, mash the apple mixture around the pot. Remove from heat when thick and saucy. This apple sauce is on the tart side, but feel free to add some sweetener if you’d like. Let cool.

Take doughnuts and use the knife to cut a small opening in the side, making sure you push the knife all the way through, but not breaking out of the other side. Fill the piping bag with the apple sauce, and squeeze into the hole you made in the doughnut, until the doughnut feels significantly heavier. Repeat with the rest of the doughnuts. To serve: dust with powdered sugar.

Any Veggies Will Do (Soup) 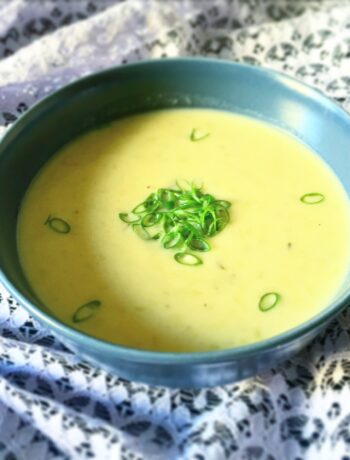 Hi, I'm Ashley! For the last 12 years, I've been perfecting vegan versions of my favorite foods. From entirely plant-based baking to the classic recipes of my childhood, I've created vegan versions to impress even the biggest skeptics.