Oh, matzoh balls; the quintessential Passover delicacy. For the past few years, I’ve been on a quest to create  perfect vegan matzoh balls. The first recipe I tried used tofu—which I prefer not to use being Ashkenazi—to replace the egg. The matzoh balls definitely held up well, but they were extremely dense.  I would have liked a fluffier vegan matzoh ball, but then again, I was just excited to be able to eat matzoh balls at all.

My next attempt at vegan matzoh balls saw the tofu replaced with flaxseed, but I found the density to be about the same. So the year after, I eschewed matzoh balls altogether and made a potato leek soup instead. I had almost given up hope that I would one day manage a matzoh ball that was vegan, kitniyot-free, and fluffy.

A few innovative individuals took it upon themselves to experiment with different ways of using flaxseed as an egg replacer. Rather than just grinding the flax and mixing it with water, they boiled the flax to extract a thick gel, which looked a lot like egg whites once it had been strained.

They then whipped the flax “whites,” and either folded them into recipes to add airiness, such as mousse, or (in whatever consider a stroke of genius) created vegan meringues. I followed these developments through this thread, and thought, hey maybe this would work for matzoh balls.

So I got to work, boiling and straining the flax, freezing the goop, and whipping it into a light and fluffy mass. I then used the whipped flax in a traditional matzoh ball recipe I found in one of the many Pesach recipe books my mom has floating around.

The results were perfect. I rejoiced in the eating of a light and fluffy matzoh ball that didn’t disintegrate in broth (and tasted great to boot). I served my matzoh balls in an herb-scented mushroom broth, but really they can go in any kind of broth you like.

In a large pot, heat some vegetable broth or salted water until boiling. Wet hands with cold water, and form the matzoh mixture into small balls. Gently drop each ball into the boiling liquid, and then cover and simmer for about 20 minutes. I wouldn't recommend cooking the matzoh balls in the soup you plan to serve them in because they will soak up a lot of liquid.

Remove the matzoh balls from the cooking liquid and serve in your broth of choice.

Earl Grey Chocolate Buttercream: Made for the Stage! 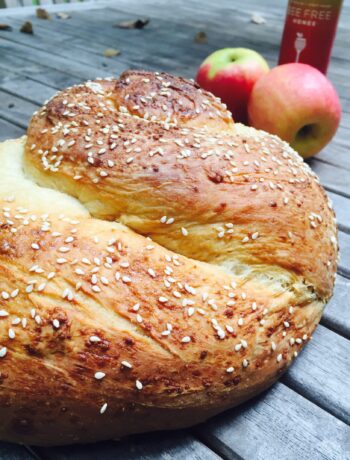